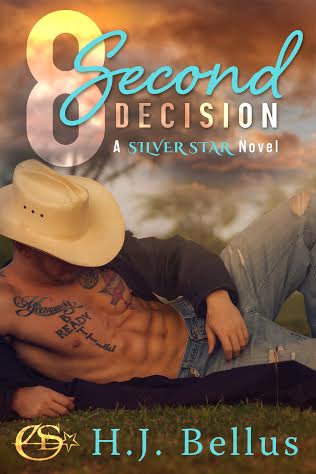 Merek Slatter is the wild card on the Silver Star Ranch in Texas and always has been. He’s blessed with his granddaddy’s love of the ranch yet haunted with chasing that gold buckle eight seconds at a time.

Tensions are high on the ranch when circumstances threaten to take it under. His dad and brothers pressure him to stay home and become an active cowboy on the ranch. However, Merek is addicted to the road and rodeo. He’s home anytime he can be and provides plenty of money to keep the family ranch afloat, but sometimes it takes more than what’s in the bank to protect tradition.

Now home on a three-month break, Merek finds himself all tied up with the new girl in town. She’s quiet and reserved but there’s something about Challis’ green eyes and feisty attitude that makes her irresistible. When he runs into her at a rodeo and catches a glimpse of her on horseback all hopes of leaving her alone flies out the window.

There are several rumors floating around town about her, however that doesn’t stop Merek from going after what he wants. He knows she’s off limits and only full of trouble, but Merek thrives on trouble and adrenaline.

Then the road calls again and it’s time to leave.
Eight Seconds
Gold Buckles
And the high…
What will he choose?

It’s nearly dusk as the light clouds whirl around in the sky. My head begins to spin even faster and I feel my back sink down the side of the trailer. I slip off the ledge I was halfway sitting on and take a chug from the bottle. My ass hits the ground with a thud and I laugh out loud. Fuck, even my laugh sounds slurred.

I look up into the most beautiful face I’ve ever seen. Unfortunately, it’s attached to Merek’s body.

“I’s fineeee.” I draw out the word fine to cover up why my speech is so slurred. I stiffen into an upright position trying to act as sober as possible.

Merek kneels down in front of me.

“Wants a drink?” I hold out the bottle to him noticing there’s only about a swallow or two left.

“Challis, did you drink all of this?”

I just shrug my shoulders.

“You’re going to be one hurting cowgirl in the morning.”

I watch as he sets it down at his feet.

“Drink,” I yell. His eyes flash between me and down to the bottle.

“Challis.” His hands grip my shoulders as I tumble forward.

“I just set a fucking record in that arena. Beat all the hometown girls with their daddy’s money behind them and you won’t drink my wisskey?”

Merek has me wrapped up in one arm while he chuckles at me, which only pisses me off even further.

“Okay, sorry. Sorry.” He bends down, snagging the bottle from the ground. “Is this what you want, Challis?” He dangles the bottle in front of my face.

“I want you to have a drink with me.” I clutch the bottom of the bottle and help guide it to his lips.

“Okay, okay, calm down.” He parts his lips just enough for the opening of the bottle to rest on his bottom lip, and I pour all the liquid into his mouth.

I feel him backing us up until my back smashes into the side of the trailer, and it’s not until this moment that I realize I have one hand wrapped around his neck and the rest of my body pressed up against his.

“Happy now?” He crooks an eyebrow at me.

I let out a giggle.

I shrug my shoulders. “This is my first rodeo since my daddy died.”

Tears fall down both cheeks this time as I hold nothing back nor have the willpower to hide the pain anymore.

“Come here.” Merek guides my head down on his shoulder and my tears flow down the crook of his neck. I feel his hand rubbing circles on my back in a soothing motion and I don’t fight any of it.

A long time passes before either of us move or even talk to each other. I allow my body to melt into his and let him hold me as I try to calm the wild stream of tears.

“Merek.” We both look up to see the blonde once again and it’s as if all my senses snap right back into place.

Merek takes a step back from me and I feel my body sway. My feet try to find steady ground, but none ever comes and then my body is free falling to the ground. I feel Merek’s hands on me again and pulling me right back into his chest.

“Fine, uh?” He brushes a stray hair from my cheek. “I’m going to introduce you to Madison.”

“No.” But before I can put up more of a fight, the nosy bitch is standing feet away.

“Challis, this is Madison, and Madison, Challis. Madison and I were best friends growing up.”

I listen to the bullshit flying from his mouth but don’t react.

“Nice to meet you, Challis.” She runs her hands down the front of her short shorts, then turns to Merek. “I’m leaving, just wanted to tell you nice ride tonight.”

She steps up and places a peck on his cheek with me cuddled in his arms. I wipe at my eyes, making sure I just witnessed the scene that went down.

“You have a ride home? I know you’ve been drinking.”

She turns and points to a tall and lean cowboy talking to Merek’s brother.

“Fuck, you picked a roper out of all the cowboys around to take you home.”

“Yep, see ya, Merek.” She slaps him on the ass and bounces off.

Merek turns back to me and must see the obvious stunned look on my face.

I throw my spinning head back while I let Merek still hold me up. “Good lord, I need another drink.”

“You got it, cowgirl, but no more whiskey. Let’s just keep this drunken state up.”

“I hate it when you fucking call me that.”

“Good, I’ll keep calling you it.” I tilt my head back down and tap him on his nose.

My lips lightly brush his and he doesn’t pull back. The sweet and masculine taste lingering on them intrigues me and makes me want more. This time my lips linger on his, nuzzling from side to side, then my tongue darts out absorbing his delicious taste into my mouth.

He doesn’t back away and talks on my lips. “Sober Challis wouldn’t like this at all.”

“Sober Challis worries too much. Please kiss me, Merek.”

Reservation fills his eyes, but then he clenches them shut and attacks my lips. My back is pressed up to the trailer again. Both of his large hands grab the sides of my face as he kisses me hard. I wiggle my way up to him and throw all of my body into him. After several seconds of his lips attacking mine, I play back and begin kissing him, not missing the moans of pleasure he releases in my mouth.

His taste is nothing I’ve experienced before and damn near addicting. My tongue laps up every ounce of it. A few hoots and hollers fill the air and I know they’re directed right at us. I remove Merek’s hat and cover our two faces with it, blocking out our little make-out session.

“I see you’ve kissed a cowboy a time or two,” he mumbles into my mouth.

“Maybe.” I shrug. “Or just watch a lot of western movies.”

His lips are back on mine, kissing me even harder if that’s possible, as my one free hand tugs and pulls the man closer into me. Once sealed together, I trail it down the front of his shirt and search for the top of his jeans, and once I find his buckle, I flip it undone with ease.

Merek begins shaking his head side to side. “Nope, not tonight.”

“C’mon.” I nod toward the front of my trailer.

He grips both sides of my face and forces me to look up at him. “Challis, you’re going to hate me in the morning for just kissing you.”

I drop my head and mumble. “Yeah, go for the skanks anyway. I ain’t no buckle bunny.”

Merek doesn’t respond. Instead, he hoists me up and over his shoulder, slaps my ass, and begins limping. I can tell he’s in pain from the way my body sways side to side, and I feel as if I’m going to slide right off his shoulder.

He doesn’t listen to me, and when I look up I see the back of his pickup and feel him stop and slide me down his chest. He settles in on the tailgate of his truck and leaves me staring dumbfounded at him. He holds out a hand to me, but I don’t grab it and soon feel his grip on my forearm as he tugs me into his lap, twirling me around first. I settle nicely between his legs and look around to all the staring people.

I struggle a bit to get free, or at least turn and face Merek, but he keeps my hips firmly planted.

“Here, Sis. This will help.” His brother hands me a drink. “Maverik, by the way.”

“Yeah, thanks. I’ve waited on you in the bar.” I grab the drink and pound it, welcoming the burning whiskey. “Another.”

He chuckles and walks away. Looking back at Merek, I’m relieved he’s deep in conversation as my drunken state has begun to wear off a bit. Maverik hands me another solo cup and I slam it and then nurse the beer he handed me.

Merek’s telling tales of traveling up and down the road and the different buckers he’s been on. I sit and listen to him and almost feel like I’m back home with my rodeo crowd just bullshitting after a rodeo. I relax back on Merek’s solid chest, laying my head on his shoulder, gazing up at the star lit night sky.

“Too much whiskey?” he whispers in my ear.

“Yeah, I’m fucked up.” I reach up and lightly pet the scruff on his jawline. And even in my drunken state I know this has gone way too far already.

I remember his iced leg from earlier. “Hey, are you okay? What did you hurt?”

My eyelids become heavy as his words slur together in my head, swirling around until my eyes finally shut and a welcoming darkness takes over.

This contemporary western is full of spice, mystery, sexy cowboys and one headstrong cowgirl all trying to save their respective ranches.  Both Challis and Merek are headstrong and hardworking.  They clash with each other in the beginning but mostly work their way past that.  You have the push and pull of the sexy romance part of the story then you have Challis’ gold digging step-b**** and the mystery of who exactly is trying to sabotage Merek & his brothers’ deal to try and save their beloved ranch.  Seeing if the relationship between Merek and Challis was going to be able to withstand all the stress around them kept me turning pages all night long.  Can’t wait to read the next book.

ADD TO YOUR TBR

I’m just a simple girl who loves the country life.. .oh yeah! & a good corn dog! Throw in a little Vanilla Ice, and shits bound to get crazy! Be brave…