Anthony Bianci
Since I was a kid all I ever wanted to be was a gangster. I wanted to be feared, to be respected, and for everyone to know my name.
And then she came into my life.
I never planned on falling in love with the mob boss’ daughter. She was forbidden but somehow she became mine. She made me crave things I didn’t even know existed and made me forget about the things I thought I wanted. My quest for power faded away and was replaced by my undying love for her.
Until reality bit me in the ass and I was sent to prison for three years, doing time for a crime I didn’t commit.
Now I’m out and she is creating a life for herself, just like I always wanted for her. Only I’m not a part of that life. I won’t ruin her any more than I already have with my poisonous lifestyle.
No matter how tempted I am.

Adrianna Pastore
I wanted him from the very first time I laid eyes on him.
He was everything to me, my first love and probably my last.
Then my father ruined our perfect little life, and he walked away from me.
I tried to fight for him, for our love, but he pushed me away.
When the love you crave is beautiful, yet forbidden, you can’t help being tempted.
So I’ll fight for him. For us.
Even if I’m the only one fighting. 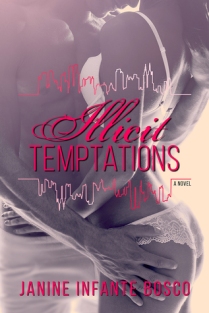 Janine Infante Bosco lives in New York City, she has always loved reading and writing. When she was thirteen, she began to write her own stories and her passion for writing took off as the years went on. At eighteen, she even wrote a full screenplay with dreams of one day becoming a member of the Screen Actors Guild.

Janine writes emotionally charged novels with an emphasis on family bonds, strong willed female characters, and alpha male men who will do anything for the women they love. She loves to interact with fans and fellow avid romance readers like herself.